The Perry twins are going to release a new set of mounted knights for the agincourt area. these can be preordered from there website from now on . Release is in January 2019. 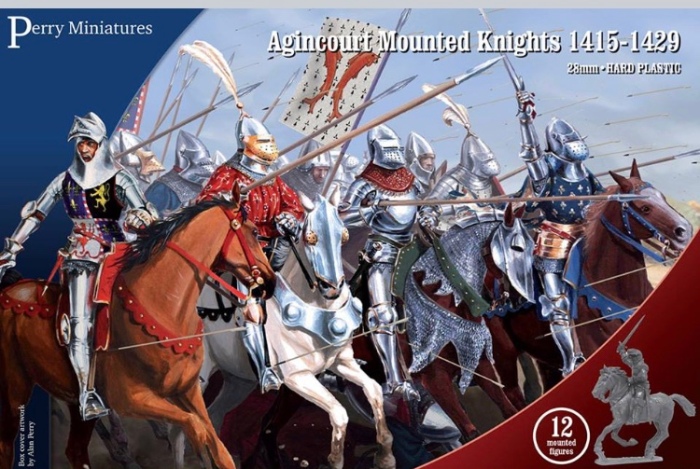 Horses are the same then in the other mounted knights boxes.

The Zulu are a Bantu ethnic group of Southern Africa and the largest ethnic group in South Africa, with an estimated 10–12 million people living mainly in the province of KwaZulu-Natal. Small numbers also live in Zimbabwe, Zambia, Tanzania and Mozambique. The Zulu were originally a major clan in what is today Northern KwaZulu-Natal, founded ca. 1709 by Zulu kaMalandela. In the Nguni languages, iZulu means heaven, or weather.. according to  At that time, the area was occupied by many large Nguni communities and clans (also called isizwe=nation, people or isibongo=clan or family name). Nguni communities had migrated down Africa’s east coast over centuries, as part of the Bantu migrations probably arriving in what is now South Africa in about the 9th century. According to Wikipedia (read more here) 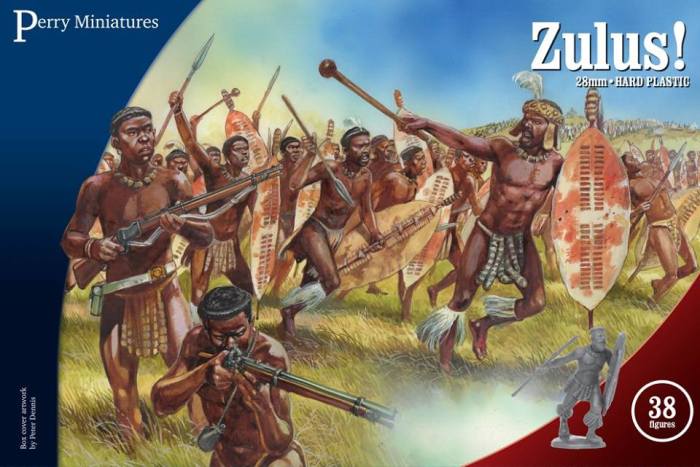 Now the Perrys are about to release these african warriors in 28mm and in plastic! They will be released on the 22nd/23rd of January to coincide with the 139th anniversary of the battles of Isandlwana and Rorke’s Drift.

Here are pictures of the sprues:

And some examples of finished figures:

And the usual Perry discount during first release: 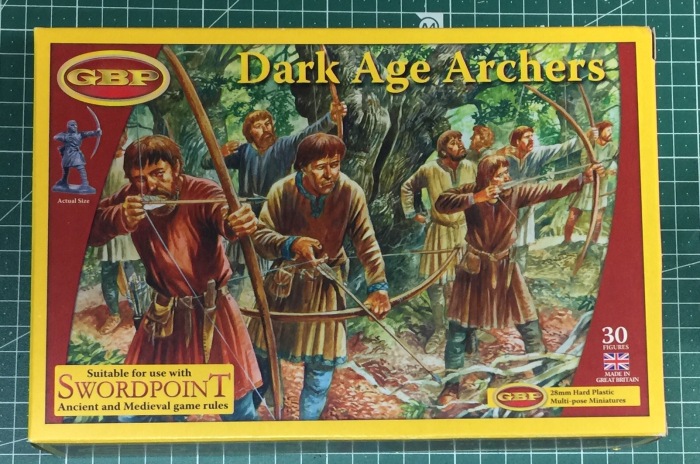 This is the latest addition to my collection. The dark age archers boxed set by Gripping beast . There are 30 figures in the box . 3 figures on one sprue, 10 identical sprues. Here is a picture of the sprue back:

As you can see these are complete figures except for the head . So not much for scratchbuilders but if you want a lot of archers all losing an arrow this is the box for you . The heads are quite nice all bare headed so can be used for all kind of figures you can use them for the dark age warriors box by GB and vice versa .

Hope that helps in deciding to get a box or not . One last word though the right arms are not in a correct archers stance but thats only recognisable  for people who do some archery themselfs.

Next parcel in the post will be the Scandinavian  Infantry plastic boxed set by Fireforge .

This is the Glover Knight unit banner bearer. I designed the banner differently from my other banners this time. In the books the banners of the sworn Houses are always or at least very often described as showing the Sigil of the house they are sworn to above the own house sigil. Here it is House Stark above House Glover. This makes for a bit of variety on the field of battle later on.

The figure was build with parts from Perry and Fireforge . As can be seen here: 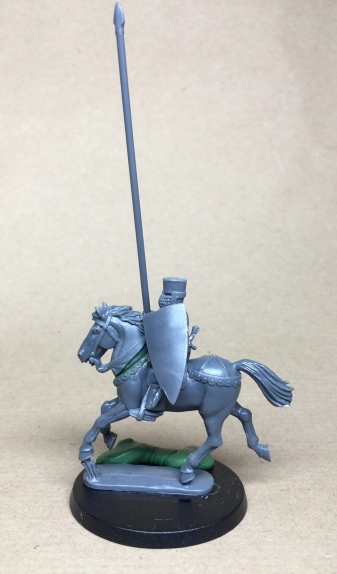 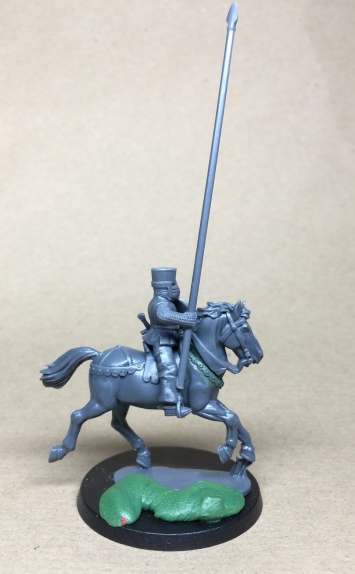 And more pictures of the knight: 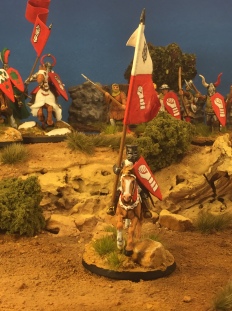 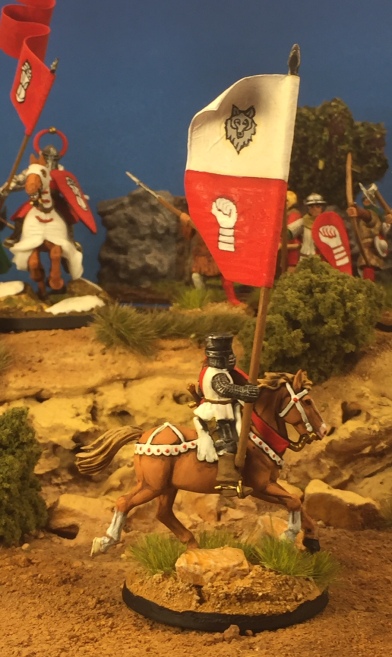 And the complete unit (missing one knight, which is not painted yet): 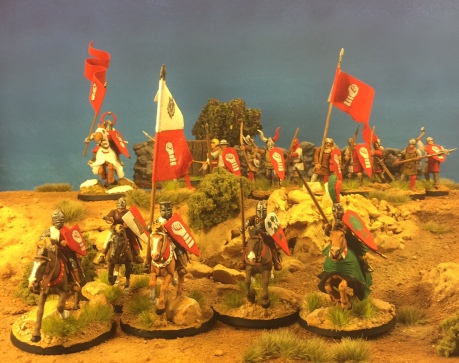 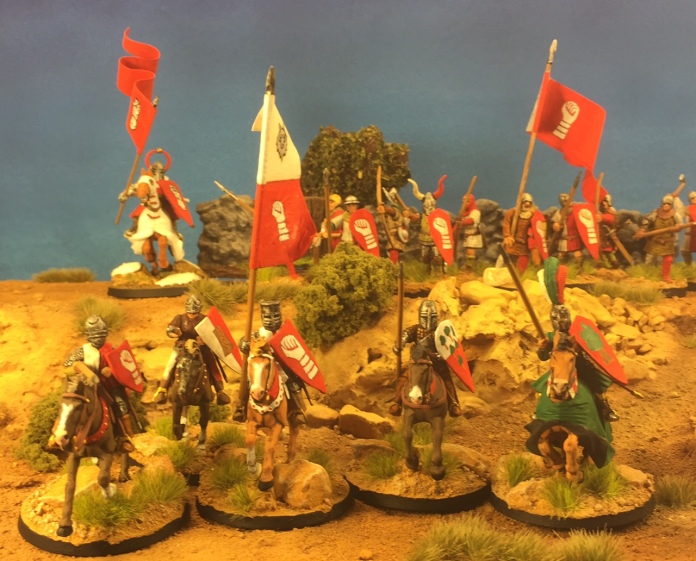 And the complete House Glover mesnie ( – one knight) 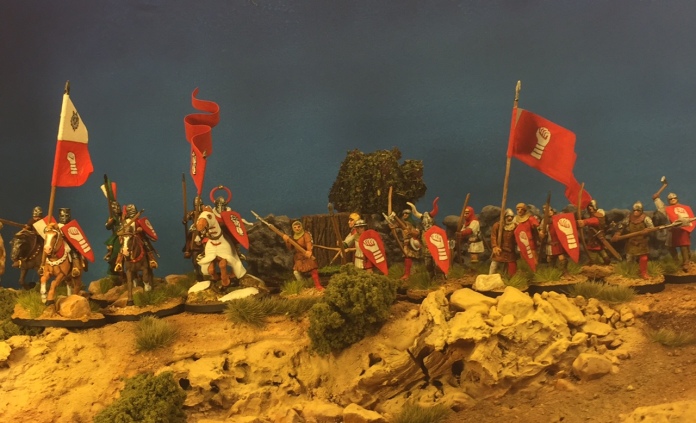 And I somehow forgot to show you the House Brax mesnie as far as it is finished last time . So here are the pictures: 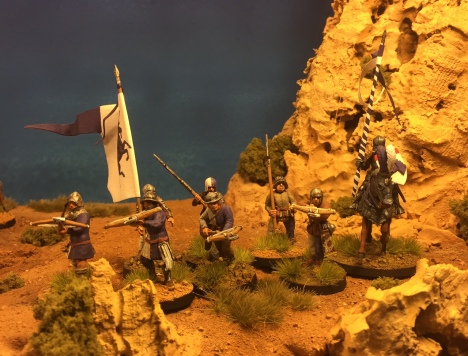 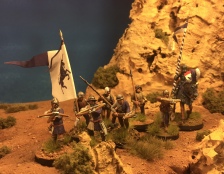 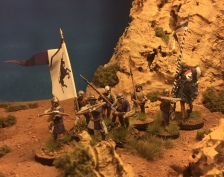 The next crossbowman, again build from the Perry french HyW Box. 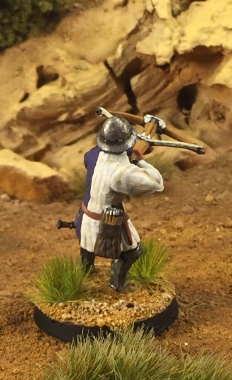 When I finish this unit, another 5 figures to do, I will start to work on my terrain tiles. I got these a few years back from TSS. These are a good start for a terrain system but I would like to have them more realistically finished . I would like to add reeds to the river section , make the water in the river and ponds more realistic and add more gravel here and there . Then I will add some new sections to the river like a little harbor a watermill and I want to do a few tiles for a village or small town. After that of course I will have to do some more buildings.

So you see after my summer holiday there will be a prolonged time of terrain building first and of course when the Westfalia halfmen army arrives at my doorstep I will paint those too. So a lot to do for the coming month!

Here is another Billman for my Brax Army. Another Perry plastic WotR figure, build from different plastic boxes can’t remember really wish ones I used sorry. 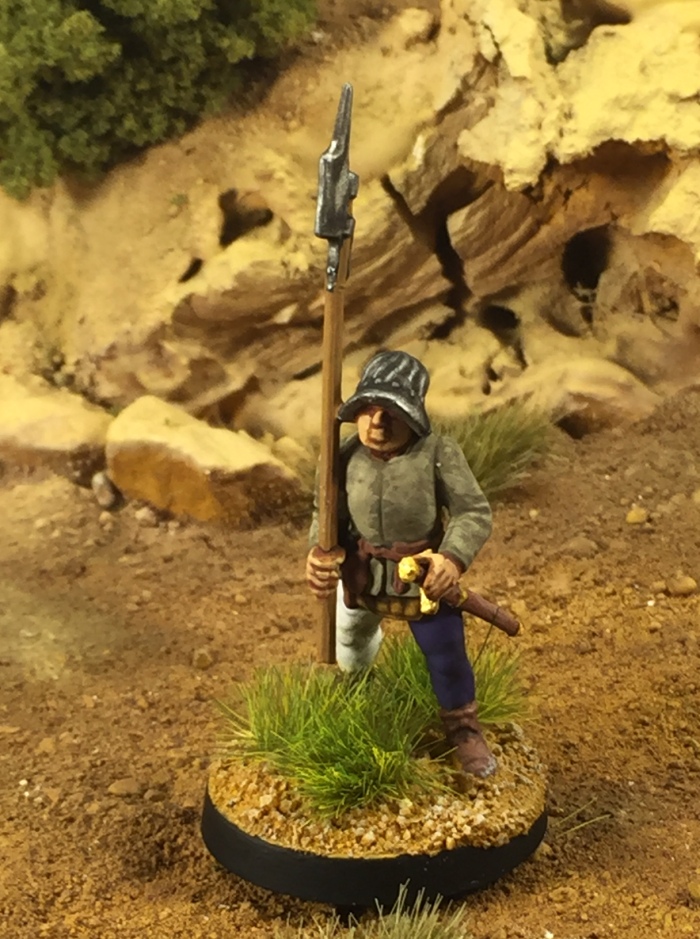 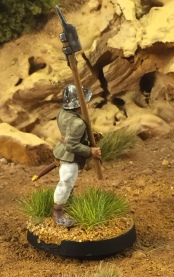 This Crossbowman was build from the Perry French 100 years war plastic box. 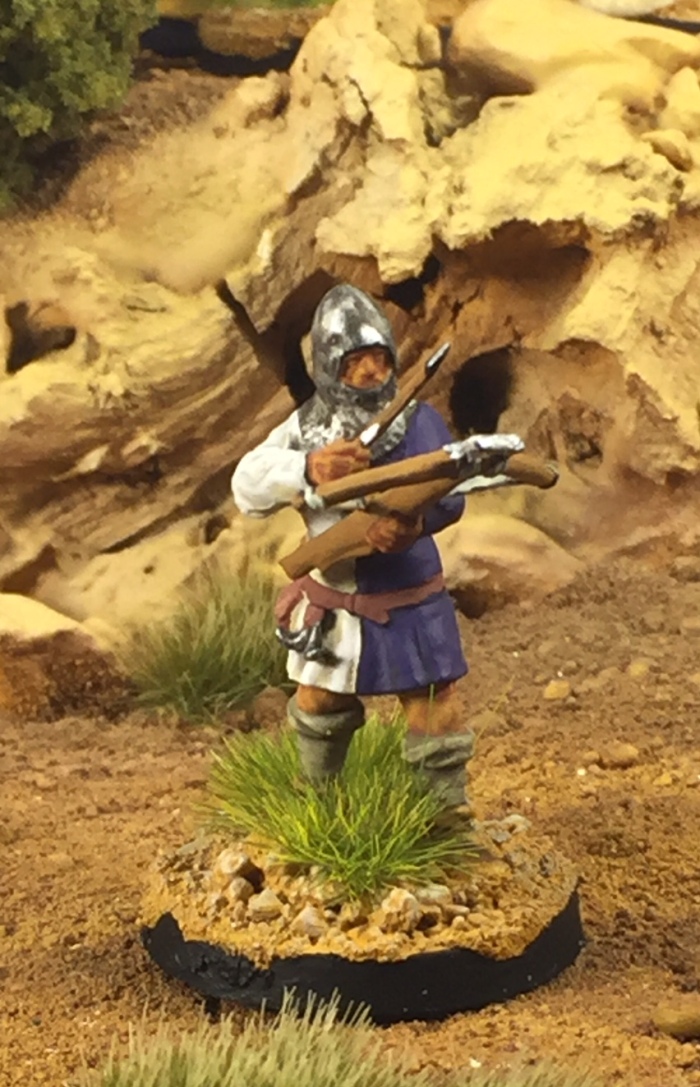 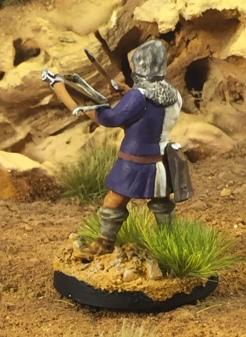 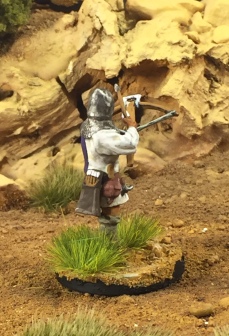 The 6th season of GoT is over but the unit building for my GoT armies will go on.

Here is another detour into figures I painted long ago . These were meant to be used with the Black Powder rules by Warlord.

Another bannerman of House Glover is House Woods. As there is no description of the Sigil of House Woods in the books I made one up. 6 trees on a field white over red. The figure itself was build from a Perry light horse body and arms and a fireforge head and shield. 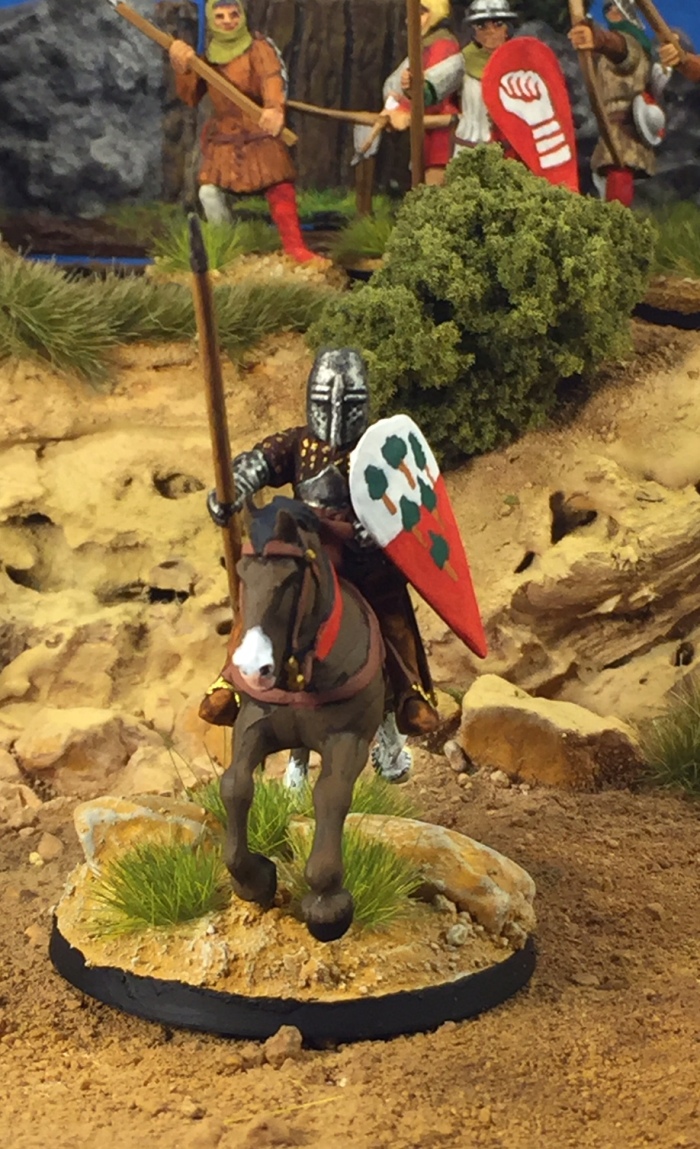 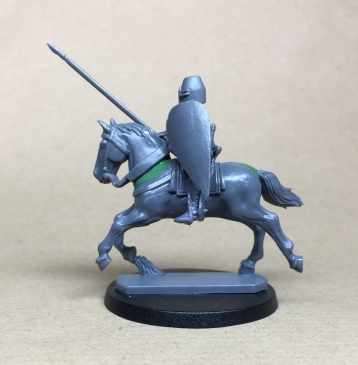 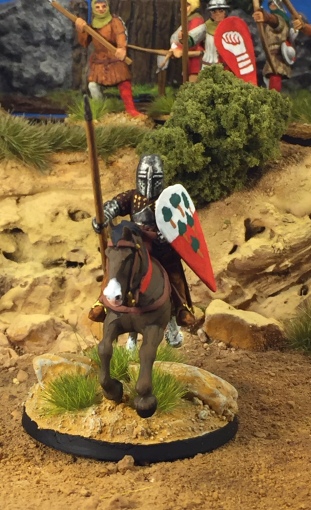 The unit so far: 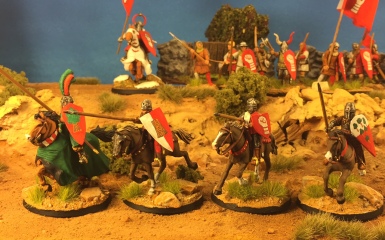 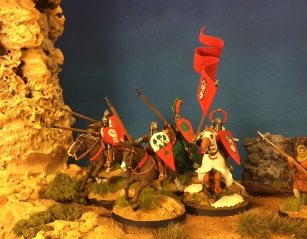 This is the Banner for the unit. It is a freehand. It was quite difficult to do as a few parts,like the legs and the horn are so small. Hope I pulled it of…. 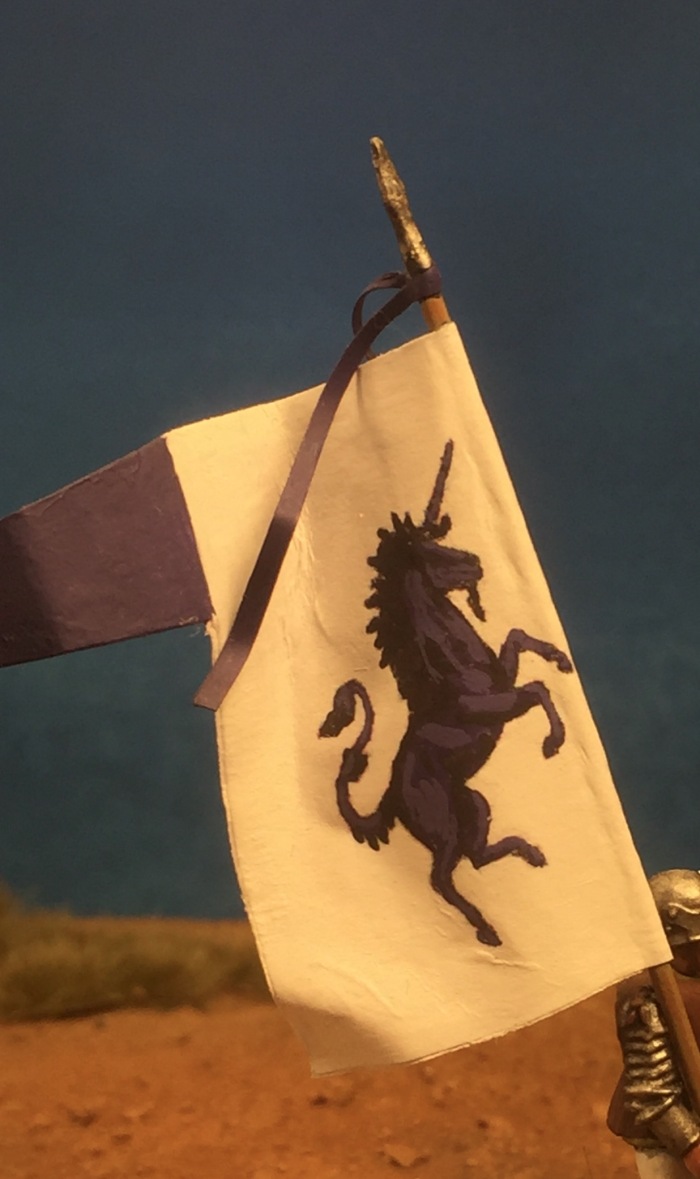 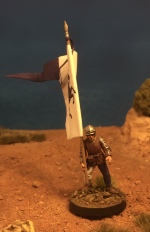 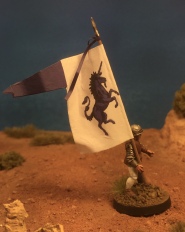